In recent posts, we have been discussing the importance of performing due diligence and estimating valuations of early-stage, pre-revenue (or early revenue) startups. One of the most important parts of many of the Top 7 valuation methods is to select a group of similar startups for comparison. Thus, it is important to understand what a “typical” early-stage deal goes for.

However, remember that there are many factors that can influence early-stage valuations, and every deal is unique.

The stats below cover the valuations for all the deals that are currently live as of October 2019 on the top four funding portals (WeFunder, StartEngine, Republic, and SeedInvest).

There were 108 active Reg CF equity-based deals (common or preferred stock, SAFEs, or Convertible Notes) on the top four platforms in October 2019.

For the total dataset, the overall Reg CF valuations were:

A look at the distribution of the valuations (or valuation caps for Convertible Notes and SAFEs) shows that roughly two-thirds of all active Regulation Crowdfunding deals were under a $9 million pre-money valuation. 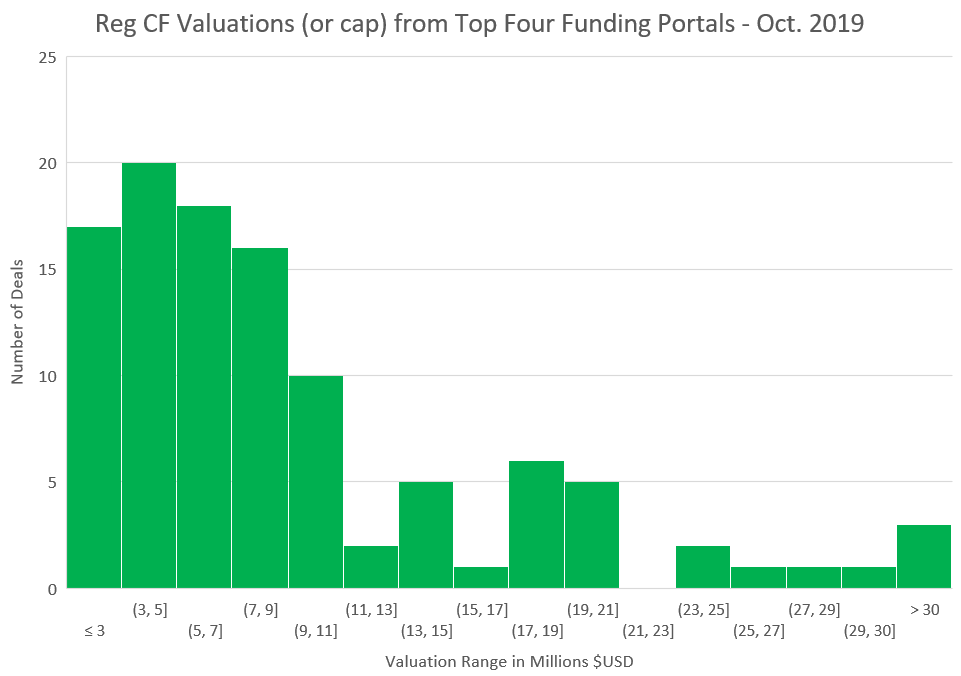 How do different funding portals compare in terms of the valuation of deals?

While two-thirds of all the deals in October 2019 on WeFunder, StartEngine, Republic, and Seedinvest are under $9 million, each funding portal does have a different range of valuations that are offered. 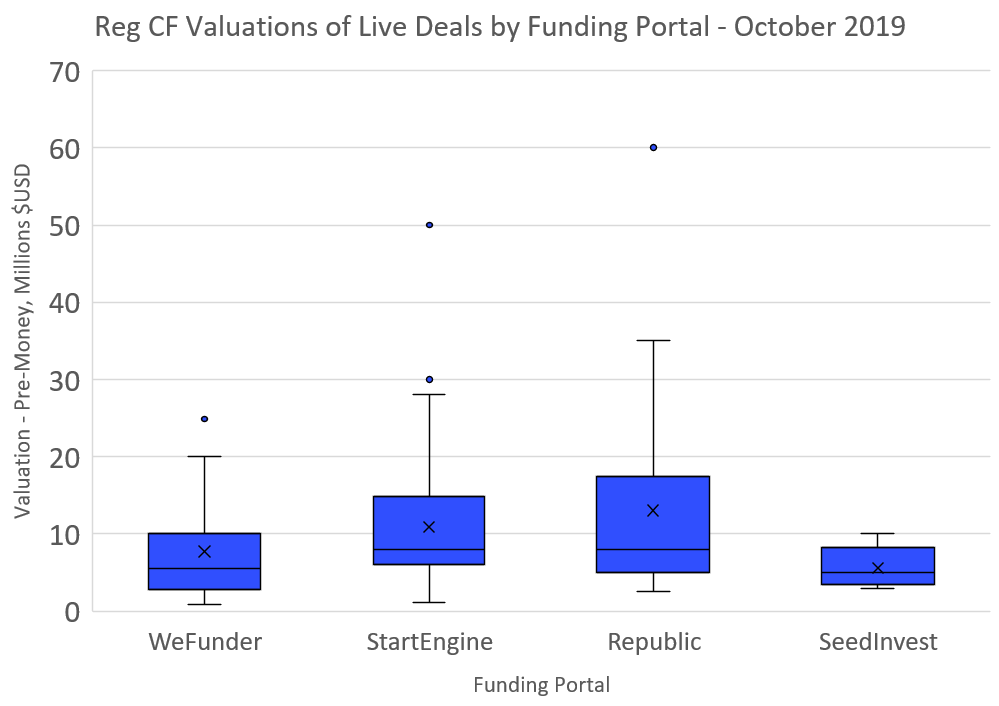 For those who need a refresher on how to read a box-and-whisker plot, each horizontal line is a quartile, representing 25% of the deals. This means the blue boxes encompass the middle 50% of all deals on each platform. Also, the “X” represents the mean, while the middle line in the blue box is the median.

You can also see that StartEngine and Republic had some outliers, where the maximum Reg CF valuations were much higher than other deals, at $50M and $60M, respectively. 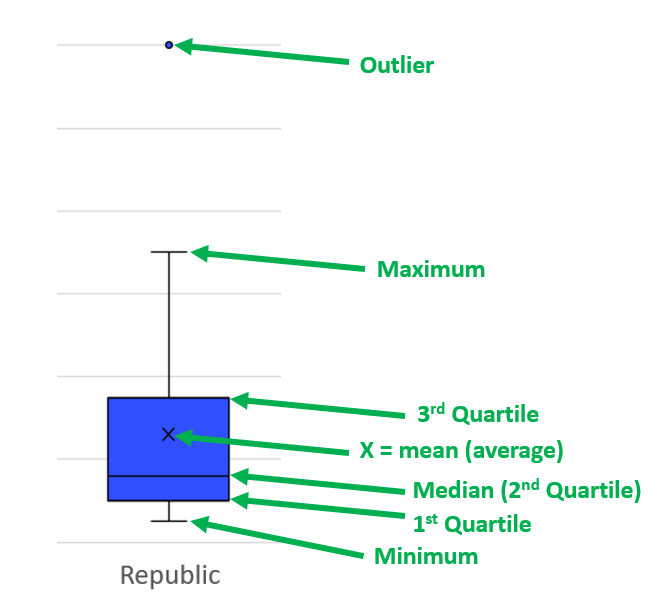 It’s interesting to note that some portals, such as Seedinvest, have a narrow range of valuation offerings for Reg CF (although Seedinvest does have Reg A+ offerings, too, at higher valuations not shown here).

Other funding portals, such as Republic, have a wider range of valuation offerings, potentially offering more diversity in the types and stages of companies that are offered.

From the 2018 HALO dataset from the Angel Resource Institute, the median and average pre-money valuations for the angel investments that were studied from 2,570 deals were:

Thus, the Q4-2019 Reg CF data is somewhat higher than the average and median angel investment valuations from the 2018 study.

Part of this difference is likely due to the fact that 59 of the 108 Reg CF deals were SAFEs or Convertible Notes, which often come with a “discount” rate for early investors. Thus, 54% of Reg CF deal valuations would convert at a 10-20%+ discount from the valuation caps that were plotted in the data.

In comparison, the 2018 HALO dataset only had 28% of securities being offered as Convertible Notes and 3% as SAFEs. Thus, the larger percentage of priced equity rounds for angel investors likely accounted for some of this early-stage discount, and may account for some of the discrepancies between crowdfunding valuations and angel valuations.

How to Use this Valuation Data

Why is this data important for investors and founders?

For founders of startups, it is good to have an idea of what other startups in similar industries or regions are being valued at, since this can help in determining what your own startup is worth. It can also be useful to know what the typical valuation is on a given funding portal, since that may be an indication of the types of investors that invest on that funding portal.

For investors, many of the valuation methods that we have discussed involve selecting similar startups for comparison.  Thus, having an idea of typical valuations can be helpful when screening deals.

Furthermore, knowing the typical valuations on a funding portal, and ensuring that they are aligned with your areas of interest, can ensure that you are only looking at relevant deal flow, saving you valuable time.

In an upcoming post, we’ll get into some actual valuation examples of current crowdfunding companies, where we will reference some of this data. 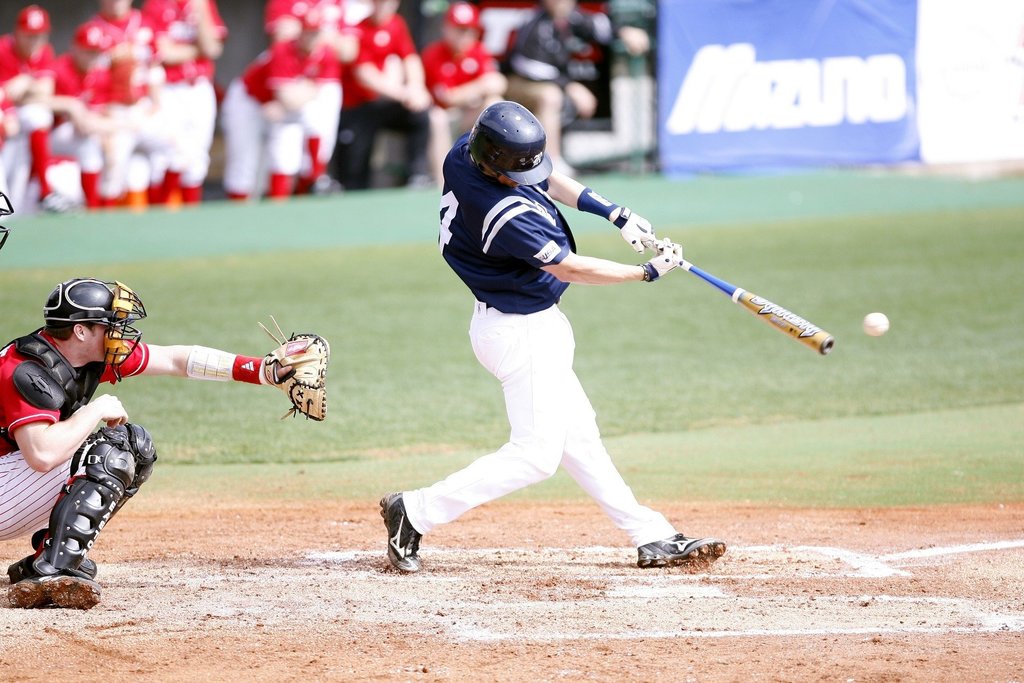 Power laws govern not only financial returns but many other things in life. Learn what power law investing is and how to leverage it for your investments.